‘Once upon the time a prince met a beautiful princess.

“Will you marry me?” the prince asked.

The princess said, “No.”

And the prince lived happily ever after. And he fished, and skied, and hunted, and went on long safaris, and he drank expensive whiskies by the campfire, and there was no one there to tell him he played too much, and that it was costing a fortune . . . ’ Anonymous

‘For us, New Zealand is a dream come true, the trout Bohemia.’ Jetske Darbeaud

‘A seeker of silences am I.’ Khalil Gibran, The Prophet 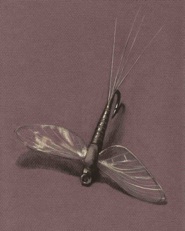 ‘Is that it then? Is this how it all ends?’ she asked, and I did not have the courage to meet her eyes.

For the past half an hour, with a heavy heart, I’d been telling Ella how this togetherness of ours was not working for me any more. How, after the autobahn of a long honeymoon, our road was getting more and more rocky and potholed, and how I was increasingly unsure I wanted to travel it. I’d been telling her how I grew tired of conflicts and dramas, how it seemed I was forever putting out fires and whenever one was out, another would flare up elsewhere until, in the end, I’d given up and thought, ‘Well, just let them burn.’

All the time I talked, she held me with a steady gaze and listened silently, two rivulets of tears running down her beautiful sun- browned face. Now that at last she had spoken, asking the question loaded with so much finality, I could not bring myself to answer it.

Truth was I didn’t know. Despite our best intentions and contrary to earlier promises and reassurances, we had lost our way. Maybe we just went into it all too hard and fast, two stubborn individuals burning with many passions but unable or unwilling to compromise. Or perhaps we were just not compatible. I really didn’t know any more.

I could feel Ella’s eyes probing me for answers, but the words failed me. I got up and gave her a peck on the cheek, tasting the saltiness of tears, then headed for the door. With my hand on the doorknob I turned to her one last time. She was still there on the couch, paralysed in stillness, her usually tall and proud ballerina’s body crumpled as if the bones were suddenly gone from it and there was nothing to hold it up any more.

‘I need to go away for a while,’ I said. ‘Let’s put some time and space into this. Maybe then we can piece it all back together.’ For a couple of beats I waited for a word from her but, as none came, I stepped out through the door and slid it shut behind me. The metal frame gliding on rollers sounded like the fall of a guillotine. Whoosh! Maybe it was how it all ended. 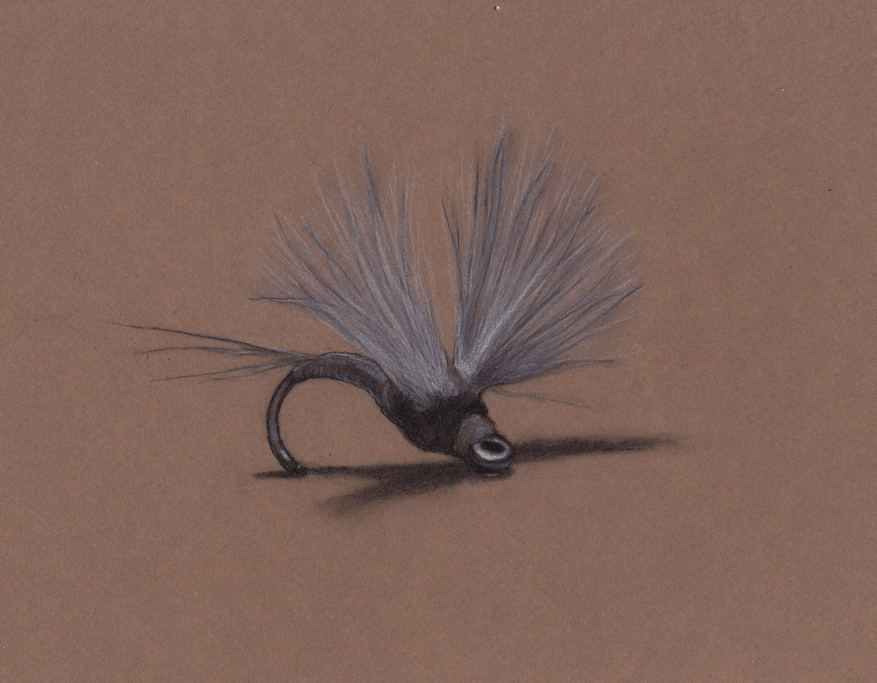 ‘The solution to any problem — work, love, money, whatever — is to go fishing, and the worse the problem, the longer the trip should be.’ John Gierach

It was early October, in New Zealand the beginning of trout season. My 4WD camper was parked in the driveway, ready to go, and Maya, my Airedale terrier, was sitting in the driver’s seat, waiting. As I was getting in, she gave me a double lick of greeting while her tail walloped the seat cover, raising puffs of sand. Then she moved over to the passenger side. It was her seat again, now that there were only two of us in the camper. I backed out on to the road and, once on the main highway, felt the Land Cruiser pick up its momentum.

I took a deep breath and it came out as a seismic sigh, and Maya’s tail walloped three times like the clap of applause. It was time to cheer up, she was implying. As so many times in the past, and they were always good times, we were again ‘Gone Fishing’ together. Might be some time and out of range. Incommunicado. Address unknown. We were going to the best place we knew: to the peace, solitude and the silences of the rivers. 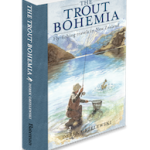 SIGNED COPIES of THE TROUT BOHEMIA are available in my online bookshop here. Worldwide shipping.

Two hours later we were in Southland, heading further into the vast green plains through which so many good trout rivers meander. In spring, Southland can be a volatile place and this time it was no different. Apocalyptic hail storms bore down on us like giant waves from the Roaring Forties, pelting the camper canopy with hailstones the size of peas. The ice bounced off the road and crunched under the tyres. There were bands of brilliant sunshine in-between the storms, and full, double-arch rainbows, and this stark illumination made the farm hills glow with surreal green, so bright it seemed almost fluorescent. It was blinding like the surface of a glacier but lush and fresh and dotted with the confetti of shorn sheep and lambs prancing on newly found legs.

The forecast was good so I was not too concerned about the passing tempests. Here and there along the way, at Anglers’ Access signs and by numerous bridges, I saw fly-fishers’ cars parked, each staking a claim of privacy to an upstream beat, but the opening- day fever was tapering off and I was confident that, like every early season over the past decade, I’d have ‘my’ river largely to myself.

By now, the sense that by driving away I was stretching some invisible rubber cord which would either snap or pull me back to Ella was gone, replaced by the gravitational pull of the river which was growing stronger. I hadn’t been back here for nearly a year and the anticipation was delicious. Butterflies in the stomach. It felt like going to visit an old friend — solid and reliable, always welcoming and always there in times of need. 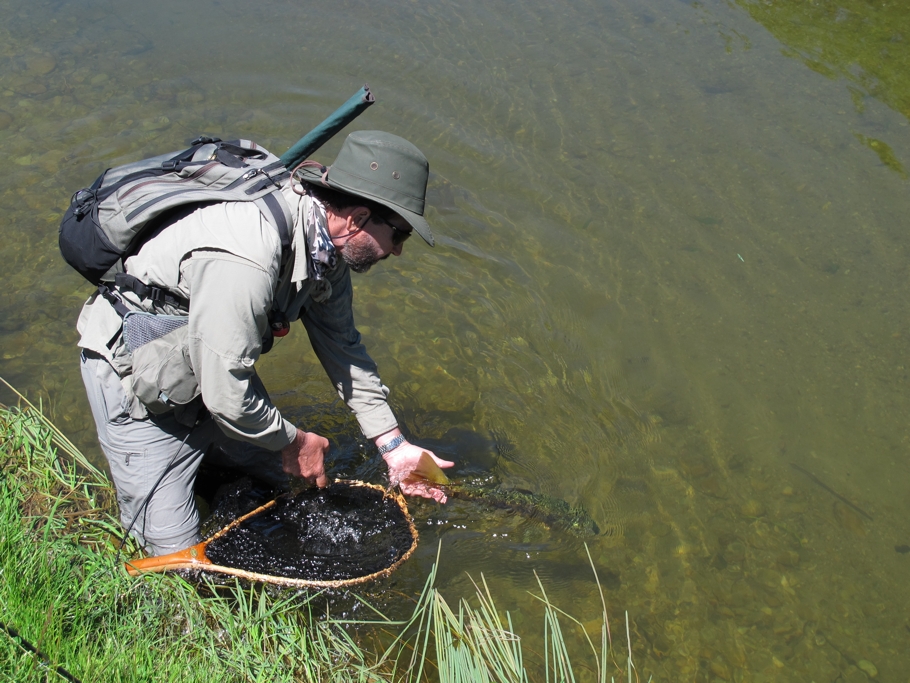 The river is not especially well known, nor is it a better fishery than any other waterway in Southland. But because of my experiences there — the rapid evolution of skills it had forced me into, the friendships and camaraderie I’d found there, the moments of magic so numerous and stacked so close together they overshadowed all other memories — it has always been a special place for me. Secret and sacred. The river of the heart.

Two years had passed since I completed The Trout Diaries and much had happened in the meantime. Firstly, like a doting teenager again, I had fallen in love just as when, this late in mid-life, I thought I was immune to such afflictions. Then there was the sad news from Grandpa Trout.   END_OF_DOCUMENT_TOKEN_TO_BE_REPLACED

Here’s a preview trailer for our upcoming TROUT DIARIES TV series, featuring the best of fly fishing in New Zealand.  Enjoy and come back as soon I’ll be uploading the entire pilot episode in sequential 5min clips so you can get the full taste of what the thing is about.

The show has been inspired by my travels and adventures during the research and the writing of both The Trout Diaries and The Trout Bohemia books. It really brought home the fact that when it comes to fly fishing for big wild trout, there is no better place than New Zealand. Realising and pursuing that has certainly been the greatest adventure of my life.

If you’d like to fish in New Zealand and are looking for information, guides, itineraries and places to stay, Contact me as I am now also a consultant and location scout for Castabroad.com which is the leading agency and itinerary provider for fly fishing in our Country of Trout.

Happy fishing and see you on a river!